Develop and Rehearse an Escape plan

Properly installed and maintained smoke alarms in the home are considered one of the best and least expensive means of providing an early warning of a potentially deadly fire. Smoke alarms save lives, prevent injuries, and minimize property damage by enabling residents to detect fires early in their development. The risk of dying from fires in homes without smoke alarms is twice as high as in homes that have working smoke alarms.

All smoke alarms should be tested at least once a month to make sure they operate properly. If a smoke alarm is battery operated, replace the batteries at least once a year to make sure the alarm will work when it is needed. It’s a good practice to make replacement of batteries a seasonal routine, such as when resetting clocks in the fall or spring. Always follow the manufacturer's instructions for testing smoke alarms and replacing the batteries.

If your battery-powered smoke alarm begins to emit a low-power warning, usually a chirping sound, replace the battery immediately with a fresh one. This will ensure that your smoke alarm will continue to provide protection. 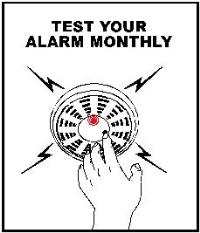 Never disable your smoke alarm, even if you experience "nuisance" alarms while cooking or showering. Clean the smoke alarm following the manufacturer's instructions, and if possible relocate it away from the kitchen or bathroom. If nuisance alarms are a persistent problem, you may need to look for a different type of smoke alarm. A photoelectric smoke alarm is less sensitive to common causes of false alarms. Some smoke alarms have a silencing feature, so nuisance alarms can be stopped quickly and easily.

At the same time you replace your smoke alarm batteries, replace the batteries in your Carbon Monoxide (CO) alarm. CO is a colorless, odorless gas that is produced when any fuel is incompletely burned. About 150 people die each year from non-fire, carbon monoxide poisoning associated with home fuel-burning heating equipment. For more information on CO, see CpSC publication #466.

Recent information from broadcast news programs demonstrated that children can sleep right through the sound of a smoke alarm.

While smoke alarms have proven to be effective lifesavers, CpSC is concerned that children can sleep right through the sound of a smoke alarm and that the elderly, many of whom live alone, may not hear an alarm. 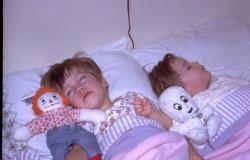 CpSC has already begun a two-year project on the Sound Effectiveness of Smoke Alarms. CpSC’s study will look into why children and older adults sleep through or do not hear the sound of a smoke alarm and whether new technologies can improve the effectiveness of smoke alarms. Our research hopes to find ways to assure that all consumers can hear the alarm quickly enough to begin their escape from danger.

Because children, older people, and those with special needs may not wake up to the sound of a smoke alarm, parents and caregivers must incorporate this possibility into the home fire escape plan.

When practicing your home fire escape plan, make sure all escape routes are clear. Correct such problems as blocked exits, jammed locks or barred windows.

Don't wait for a fire in your home to test your smoke alarm and develop a fire escape plan...

At least one smoke alarm should be placed on every level of the home. The most important location is near the bedrooms to provide an early warning to all sleeping occupants. A smoke alarm should also be placed inside every bedroom. Follow the manufacturer's instructions on how to properly install a smoke alarm.

CpSC also urges consumers to develop and rehearse an escape plan so that when the smoke alarm sounds, family members will immediately move to a safe location outside the home. 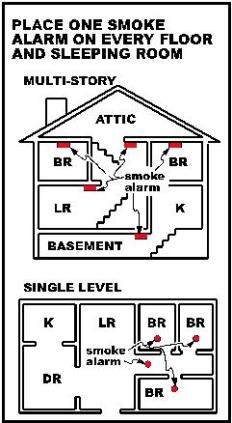